The Tomcat strikes back.

I am officially coming out as a vintage car freak – yes, I have succumbed to my passion for classic vehicles. The feeling when the adrenaline that has accumulated during the day on Tuscany’s winding roads gives way to well-earned fatigue in the evening is priceless. I am quite simply a tomcat with petrol in my veins.
But, if there is one thing that gives me even more pleasure than winding up an alpine pass in a vintage car or cruising to Trieste for an espresso, it is polishing the exquisite fireball beforehand. The way it looks, the way it feels, the smell of leather, petrol and testosterone. Every screw, every eyelet and every leather thong gets its attentive loving care and pampering.
Fortunately the garage of our upper-class villa is amply equipped with well-maintained racing cars, because Adam, my can opener, also harbours a deep passion for classic cars. One fact that restricts our harmonious life together somewhat is that they belong to him and he is only on rare occasions prepared to swap the driver’s seat with me! This is a little unsettling if it is your dream to take part in a classic rally.
I repeatedly resort to tricks to keep him away from the garage. Fictitious appointments and dates are the more harmless traps that I have set for him just to get free passage.
Last Saturday morning the following happened: Adam came into the kitchen whistling and while he was making himself an espresso, explained verbosely that the vintage car rally that had been planned for six months would not be happening for me. After careful consideration he had decided to share this irretrievable experience with his latest love interest, as she been more than keen to go.
After a brief shock-induced paralysis, I shuffled slowly to my cushion at the window, draped myself with my back to him and prepared for a counter attack. In a quiet voice I explained to him that I completely understood his decision, as she had really earned the chance to go out with him and sniff the rally air. I was also completely aware that I would only disturb their time together as a couple. What can I say; he could not believe his luck. He had obviously expected more resistance. He quickly gulped his espresso down and shot off to pack.
While he stowed his luggage, I pinched his mobile and wallet with the identity documents out of the glove compartment, sent an iMessage to his current sweetheart and cancelled the weekend. Immediately after that I used the alarm system with a direct link to the police to trigger a silent alarm. Then I phoned the police emergency number 117, pretended I was a neighbour and reported that in the house opposite a strange man had just driven out of the garage in a wickedly expensive vintage car, although the house owner was away on a trip for the weekend. Just to be on the safe side I gave them the model and number plate of the cheeky thief. Then I removed the battery from Adam‘s mobile, threw it into a flower vase and put the telephone back in its place.
When Adam left a short while later, I waved goodbye to him from the window with a smile. I counted to 100, drank a perfect espresso and got into my favourite convertible with my travel bag.
At the second set of traffic lights there was a large contingent of police and in the middle of them Adam, completely distraught and undergoing a body search. I wondered briefly how he was going to identify himself and who else could identify him, but then I stowed my sentimentality in the glove compartment and drove past the scene without any sense of regret heading for a wonderful weekend and an unfulfilled dream on four wheels! 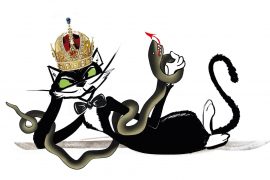 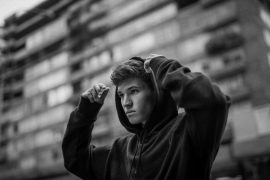 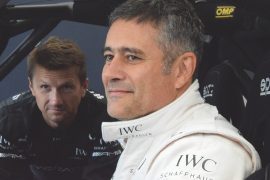