The established Design exhibition is considered as an important presentation area and significant meeting place for the «Who is Who» of the furniture scene as well as for design fans beyond the borders of Switzerland. As an additional highlight to the innovative manufacturers from home and abroad with their new products, «neue räume» traditionally shows current and future living trends in various special events. The design world returns to the stage in Zurich with an exciting program of events, interesting product innovations and culinary discoveries.

One of this year’s special events was the exhibition «Frauen im Design» (Women in design). It presented well known furniture and objects from designers, who have been making a name for themselves with their designs since the beginning of the twentieth century right through to the present day. Additionally the association «mobiglias – Handwerkskunst aus Graubünden» (Craftsmanship from the Grisons) looked for furniture and objects in a design competition which have a connection to the Grisons and were also handcrafted and preferably are made of local materials. The members of «mobiglias» manufactured the winning works as prototypes and presented them for the first time at the special event. As hoped – and expected – internationally renowned furniture manufacturers were again represented this year. In line with the motto «Wohnen ist da, wo wir uns wohl fühlen» (Living is where we feel at home), the (possibly not yet worldwide) well known Swiss furniture workshops  «Vifian» from Schwarzenburg thrilled us with the stylish entrance hall furniture «trio», which captivates with its delicate look as well as its versatility. Modular, courageous and multidimensional! The brands «Gufram» and «Memphis Milano», which are now also part of «Italian Radical Design», certainly made a trendy appearance. The newly named group was founded with the goal of reinforcing Italian design brands that stand out thanks to an unmistakable and non-conformist approach. In Switzerland both labels are exhibiting together for the first time at «neue räume 22» and amongst the predominantly discreetly colored furniture pieces at the exhibition the colorful furniture world of the Italians was unmissable. Fritz Hansen was fortunately also present, this time with a selection of cuddly lounge chairs and of course Tom Dixon could not be overlooked, celebrating his 20 years in business this year as well as Magis, Minotti, wb form, Skagerak, ClassiCon or embru, to name but a few.

Très chic in the laundry room

In addition to furniture and objects there was also something exciting to see from the Swiss textile and laundry world. For example the company Christian Fischbacher which has been producing sensual and aesthetically outstanding home textiles for over 200 years. In conjunction with the architect and designer Hadi Teherani the joint «Contemporary Persia Collection» has now been extended by two hand-tufted carpet models. The pattern and colors were inspired by designs from Iran and combine the finest merino wool with shimmering silk and bamboo. The company Schulthess proved to us that doing the laundry can also be chic with an elegant washing tower that does not have to hide in the dark linen room. And the special program item «Orea meets Caminada» verified that cooking is also linked to design. The three-star Michelin chef, Andreas Caminada, created the cooking island «Orea AC» in cooperation with David Spielhofer. Ores plans kitchens as a project very close to their hearts, the kitchen should inspire and motivate you to cook yourself. Presented by Anna Maier, Andreas Caminada introduced the classic design with its fascinating materialization. 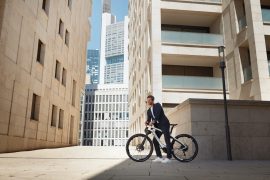